www.generationword.com
Matthew 7:21 Everyone who says to Jesus “Lord, Lord” is not one of his children.

A person can believe with all their heart that gravity does not exist but they will still fall to the ground if they try to walk on air.  Why?  Because the power of faith is in the truthfulness and reality of what you believe.  If a person believes in a Jesus who is a genie that gives them the life they want, or the woman they want, or all the money they want then that person does not believe in the biblical Jesus.  They believe a lie and there is no power in a lie to save them.

The power of faith for salvation is not how hard a person believes in Jesus but if what they believe about Jesus is true.  Jesus went to the cross to pay for the sins of mankind.

The Palm Sunday crowd believed Jesus was going to save them from the Romans, deliver them into a sovereign and free kingdom and meet all their physical needs in the .  They cried out “Hosanna” which means “save us”.  But, Jesus was going to deliver them from their sins not from the Romans.  Forty years after Palm Sunday the Romans would totally destroy Judea, , the temple and kill or enslave the Jewish people.  In 30 AD the Jews believed in a political Jesus not in a savor who would redeem them from sin.  The political Jesus did not save them from the Romans because it was a false definition of Jesus.  The Lord and Savor did die for their sins and they could believe in that Jesus and be saved from eternal damnation.

As Jesus left the palm trees of Bethany on Palm Sunday morning, about two miles southeast of Jerusalem,  his disciples went ahead into a small village filled with fig trees called Bethphage (which means “house of figs”) to get a colt that had never been ridden.  Jesus got on the colt and ascended the east slope of the .  As they came over the top of the of they could see the city of and the temple towering over the valley on the other side of the Kidron.  Thousands of people who had already arrived from Judea and Galilee encircled the city and filled the valley and the slopes of the with their tents and temporary shelters.  Josephus says that 256,500 lambs where sacrificed at Passover in .  If each lamb fed an average of 10 people then there would have been at least 2.5 million people in and around as Jesus rode down the western slope of the of , through the and up the steep eastern side of .  Over half of the entire population of Judea and Galilee would have seen or heard Jesus coming into that Sunday.

Looking at the of and over the from

This day could be considered the highlight of Jesus ministry.  The people shouted key phrases which clearly indicated they where calling him the Messiah:

“Blessed is the coming kingdom of our father David.” (Mark 11:9)

Yet it says in Luke 19:41, in the midst of the shouting crowd who welcomed him into their city, Jesus began to weep.  Why would Jesus weep as a crowd, which could have been approaching a million Jews, shouted “Hosanna” or “Save Us!!”?  Because they did not understand who he was.  They had the wrong definition of a savior.  They had given Jesus a false identity and had chosen to believe it.  Jesus said as he wept among the shouting crowd:

“If you, even you, had only known on this day what would bring you peace – but now it is hidden from your eyes. The days will come upon you when your enemies will build an embankment against you and encircle you and hem you in on every side.  They will dash you to the ground, you and the children within your walls.  They will not leave one stone on another, because you did not recognize the time of God’s coming to you.” (Luke 19:42-44)

Our concern today is if we have made the same mistake.  Jesus said in Matthew 7:21:

“Not everyone who says to me, ‘Lord, Lord,’ will enter the kingdom of heaven, but only he who does the will of my Father who is in heaven.”

“You are my friends if you do what I command.”

This is not about being legalistic but it is about believing in the correct Jesus.  If a person says they believe in Jesus or they have accepted Jesus but have they have no trouble violating his commands and his expectations of living as a child of God then the assumption has to be that they possibly have not believed in the same Jesus described in the Bible.  Along with each person’s name comes the character of the person.

The same is true of Jesus.  The Palm Sunday crowd called out to Jesus to “Save us!” They called him “Lord” and “Son of David”.  These were the correct names but they had replaced the character and purpose of the Lord with their own desires and plans.

To believe in a Jesus who doesn’t expect you to walk away from sin is to believe in a lie.  There is no power in faith in a lie and no power in a belief in something that is not real.   The Jews found out that there was no salvation in Jesus when they redefined who he was with their own desires and plans.

“This is the verdict:  Light has come into the world, but men loved darkness instead of light because their deeds were evil.  Everyone who does evil hates the light, and will not come into the light for fear that his deeds will be exposed.  But whoever lives by the truth comes into the light, so that it may be seen plainly that what he has done has been done through God.” (John 3:20-21) 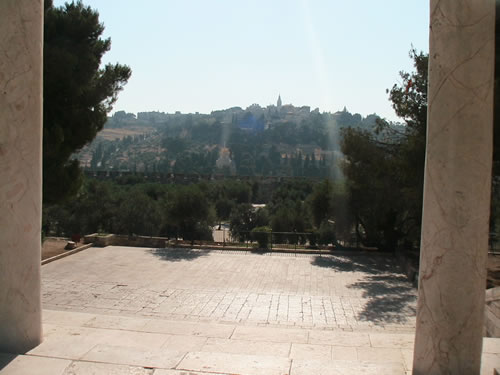 Looking east at the from the temple mount where the Jewish temple stood in 30 AD. 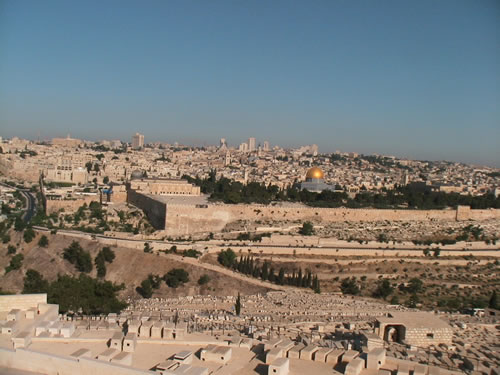 as seen from the side of the .  The bottom of the steep Valley is not seen in this picture.  On Palm Sunday all of this open area would have been filled with people.  Today you can see thousands of Jewish graves up front at the bottom of this photo and Muslim graves on the other side of the along the eastern wall of .