Distance from in miles. 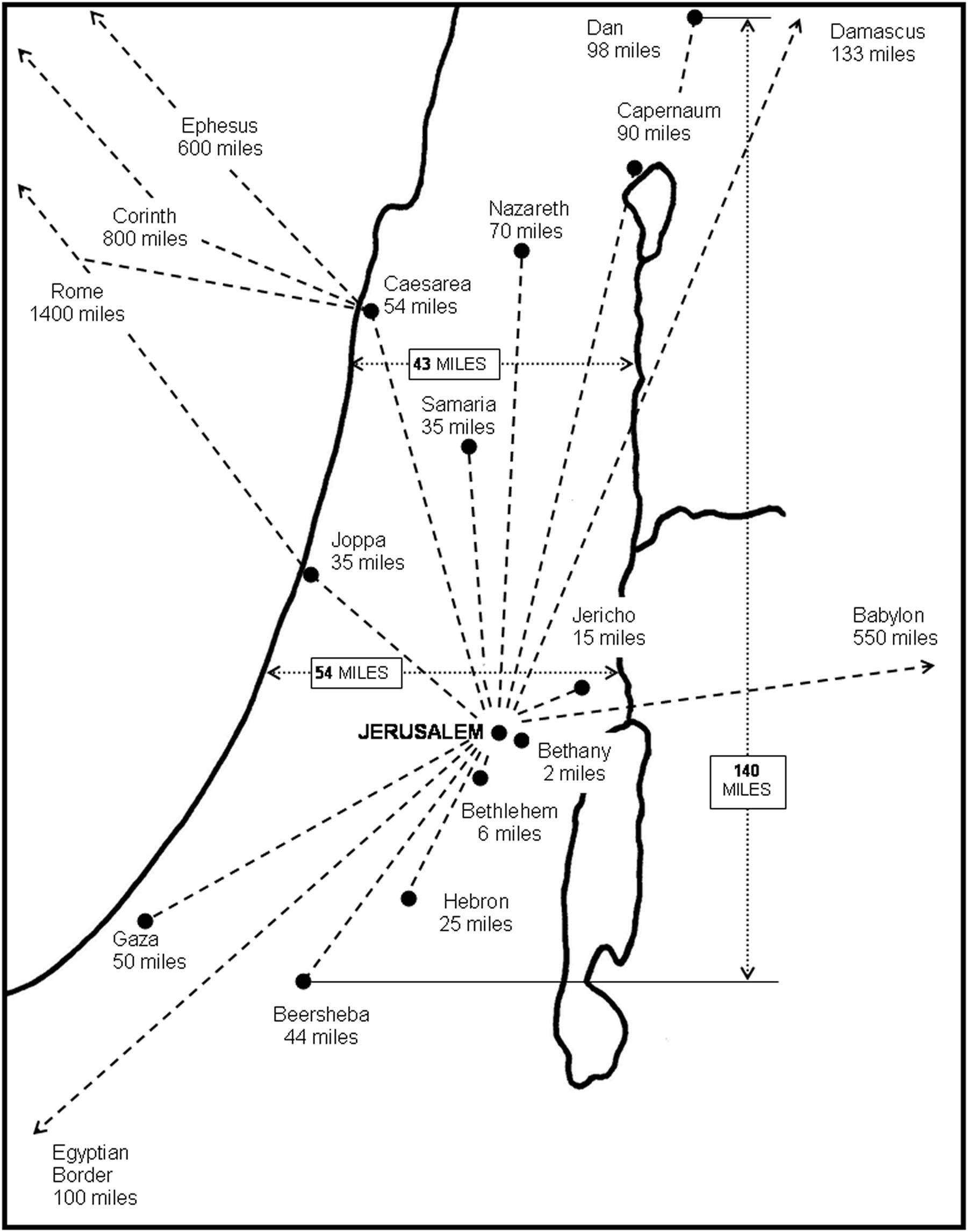 General location of cities and land marks in . 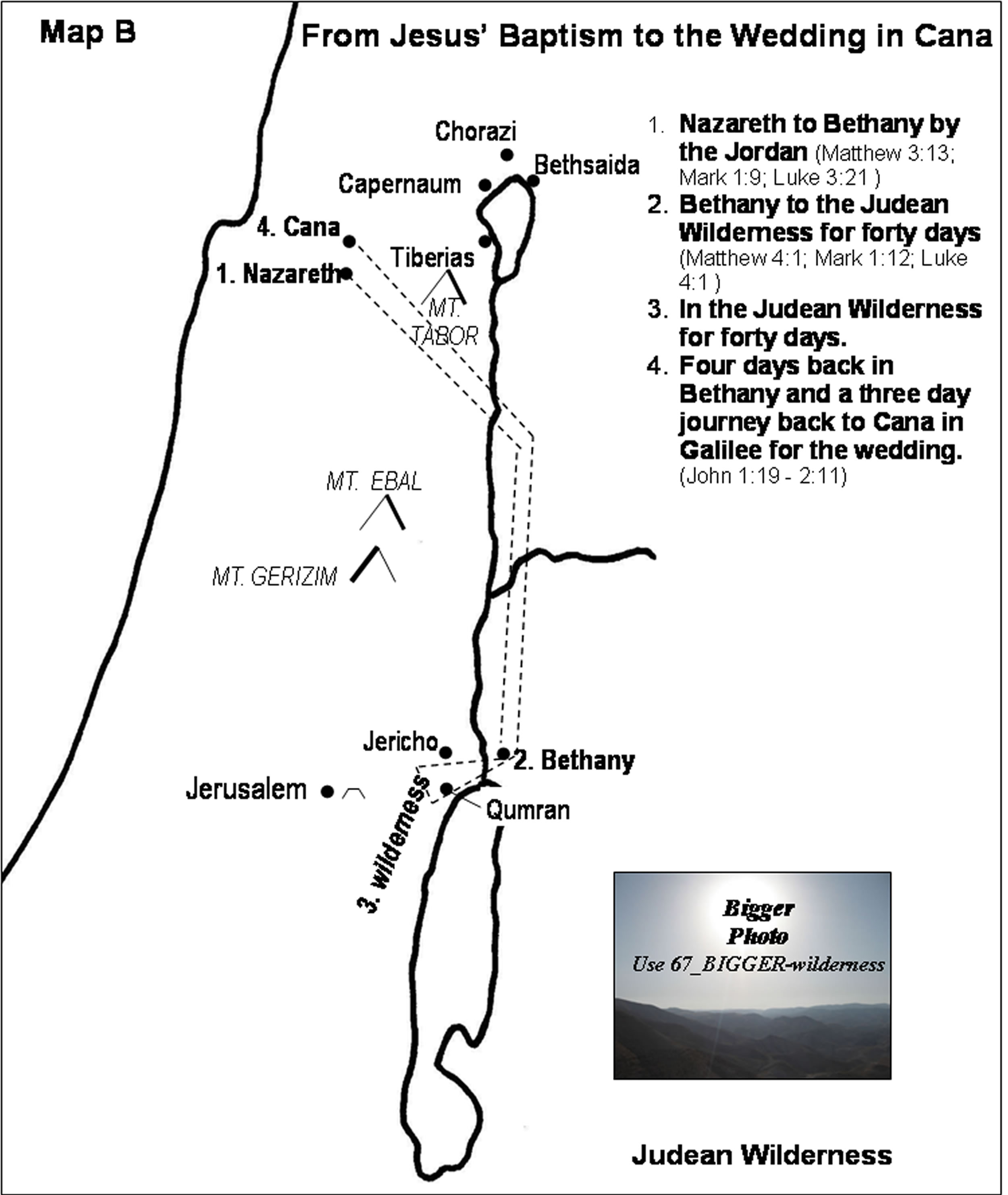 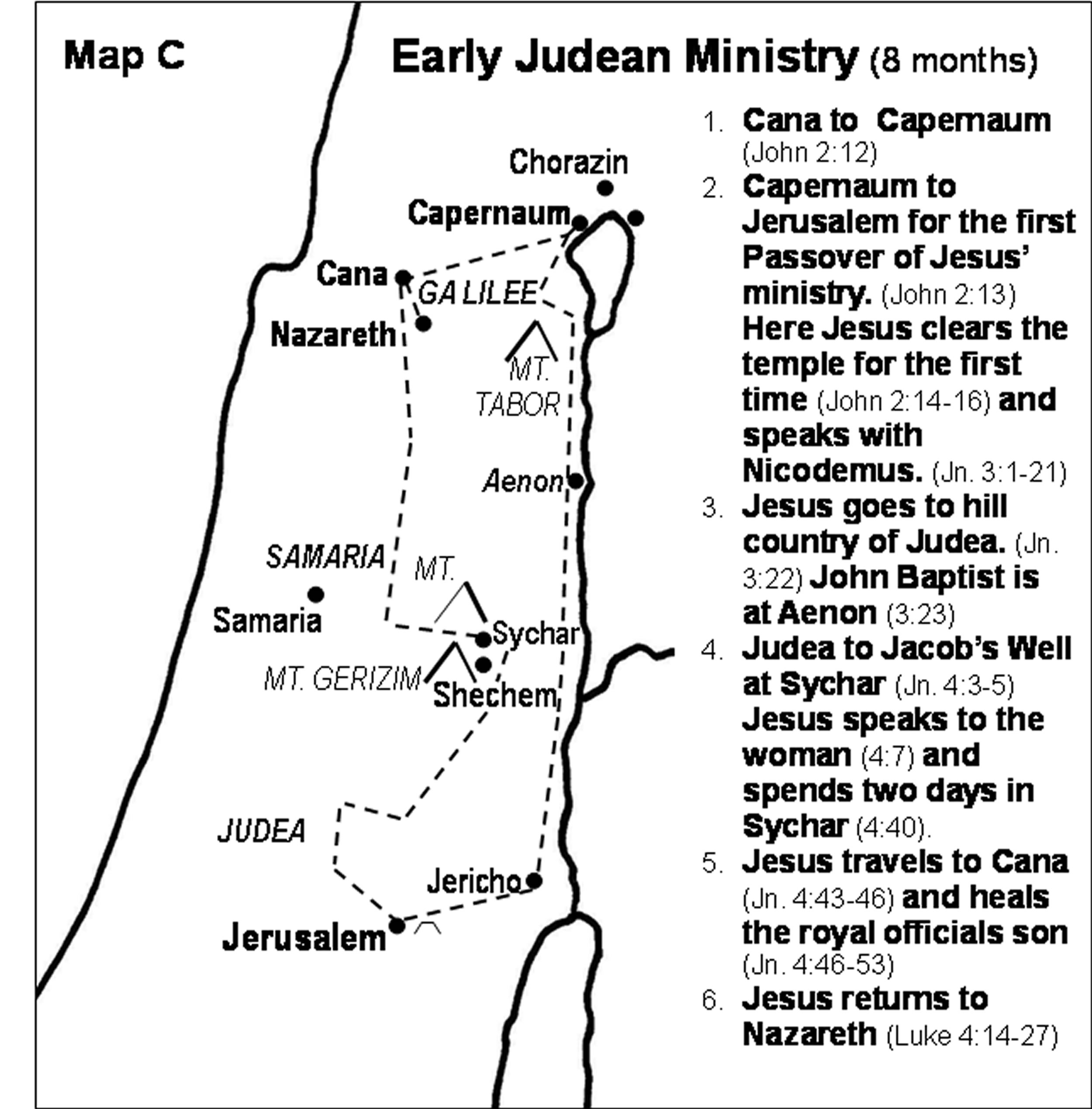 The Time Frame Between the Temptations (Matt. 4:11)  and Jesus returning to after John's Arrest (Matt. 4;12)

The time between Jesus ending the temptations in 4:11 and Jesus entering in 4:12 include a time period of about 10 months: 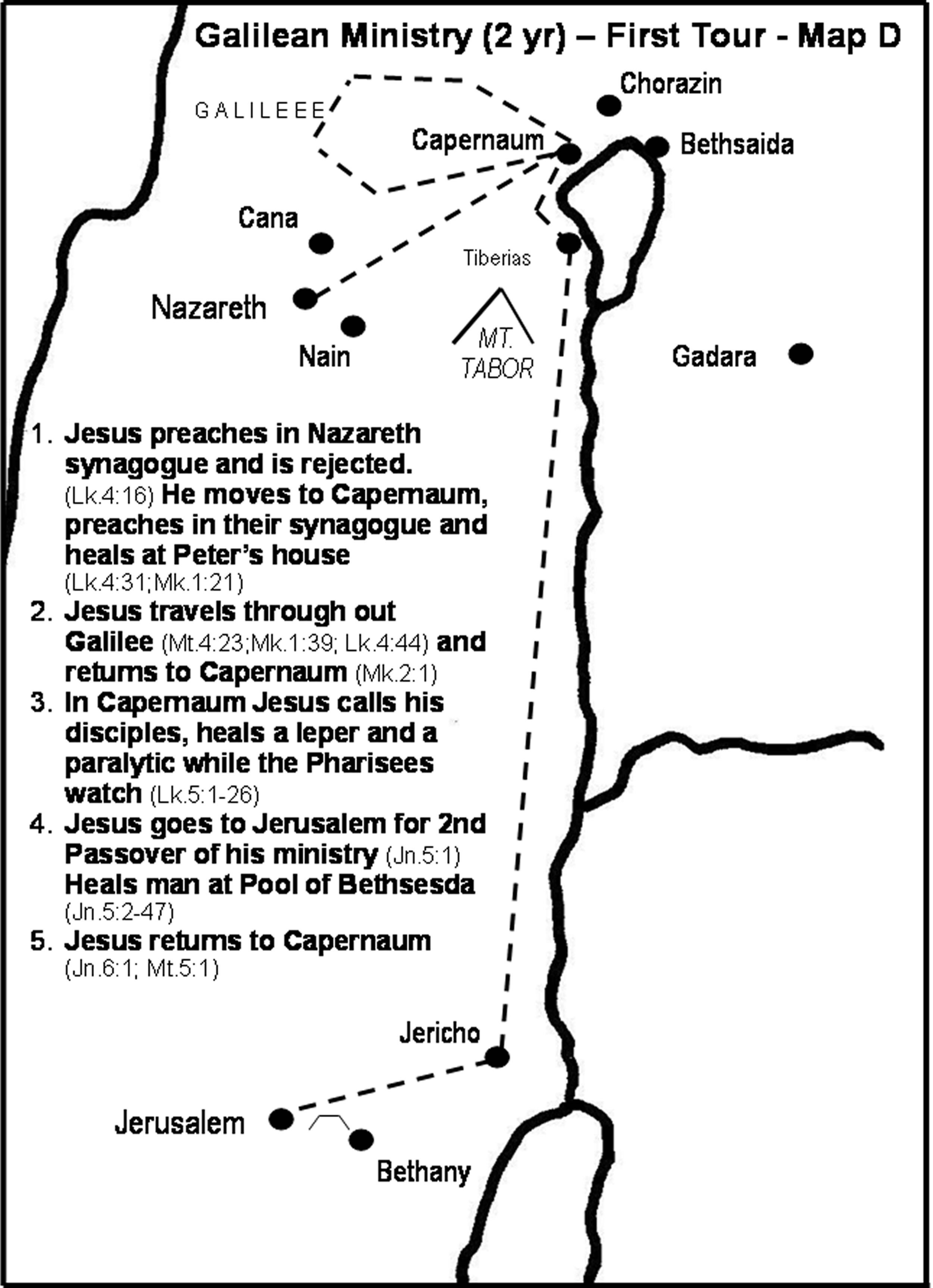 Galilee is a region west of the Jordan River and the Sea of Galilee with () on the west and north, on the north and            on the south.

is not a large area of land, but very fertile and heavily populated.

Josephus says the land was all cultivated and had no waste land.

There were about 200 cities and villages in . Josephus must exagerate when he says the smallest city in had 15,000

The capital of was moved from Sepphoris to Tiberias. Sepphoris had a population of 50,000.

Jesus grew up 3.5 miles south of Sepphoris in Nazareth, which was also 1.5 miles east of one of Galilee's other largest cities, Japhia.

Tiberias was rumored to have been built over a cemetery so the Jews were reluctant to live in Tiberius.

The most important roads passed through . The was open to trade and ideas due to these routes with many races.

( was in a mountainous, hill country isolated from the trade routes and off the main roads.)

was the headquarters of Jesus ministry.

Three disciples were from here, plus Peter and Andrew moved here from .

covered a quarter of a mile of sea coast.

Fishing and the industrial production of basalt implements (olive presses and grain grinders) were made here and shipped around .

There was a custom station there because it was close to Philip's territory (Matt. 9:9).

also was large enough for to station a centurion and his troops there (Matt. 8:5-9) and an officer of the king (John 4:46)

Franciscans own it today and have excavated the city, the synagogue and built a church. 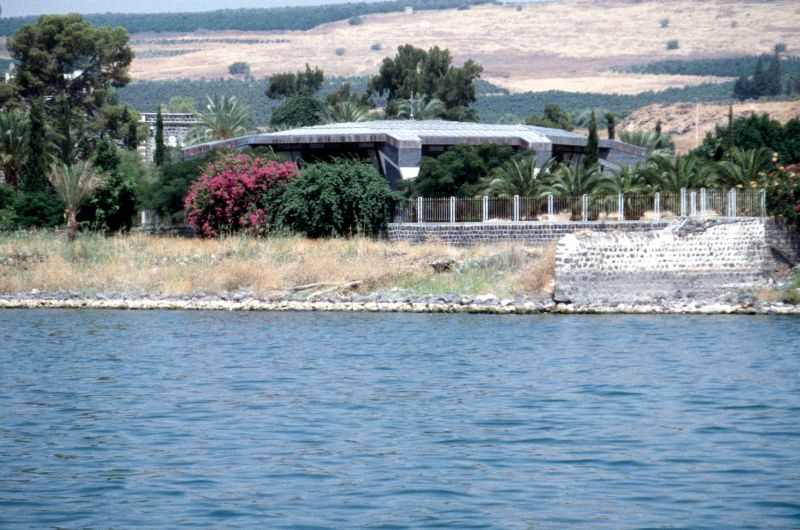 Capernaum as seen from Galilee (notice the structure which is a modern church built over an ancient church which was built over a house from the time of Jesus. It is assumed the early Christians built a church over Peter's home in Capernaum (http://www.holylandphotos.org) 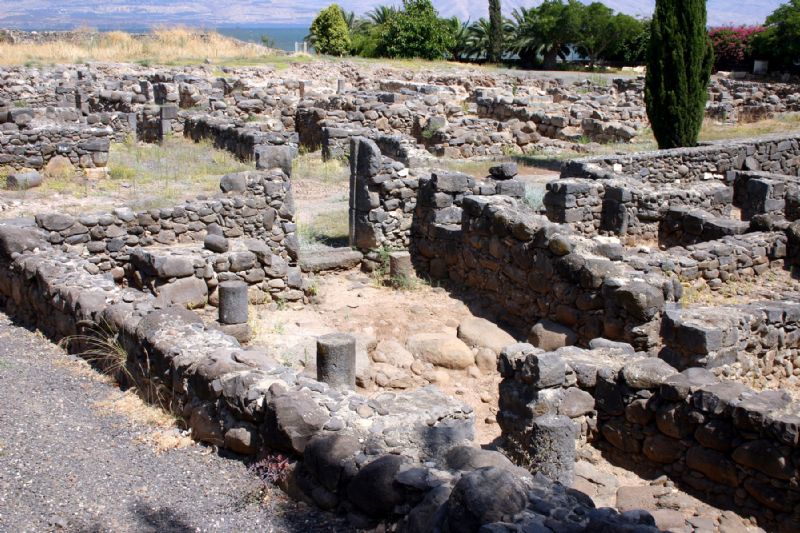 These are residences or homes in Capernaum. Notice the Sea of Galilee at the top of the photo 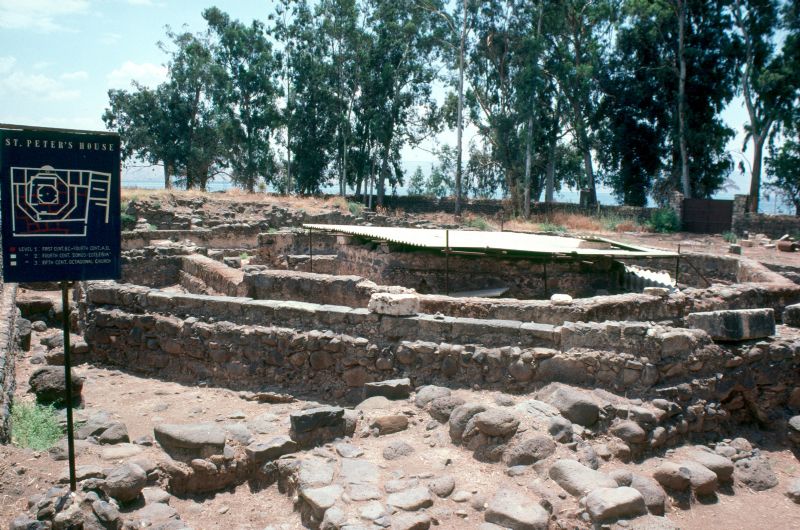 Here is the ancient church built over one of the homes in Capernaum. 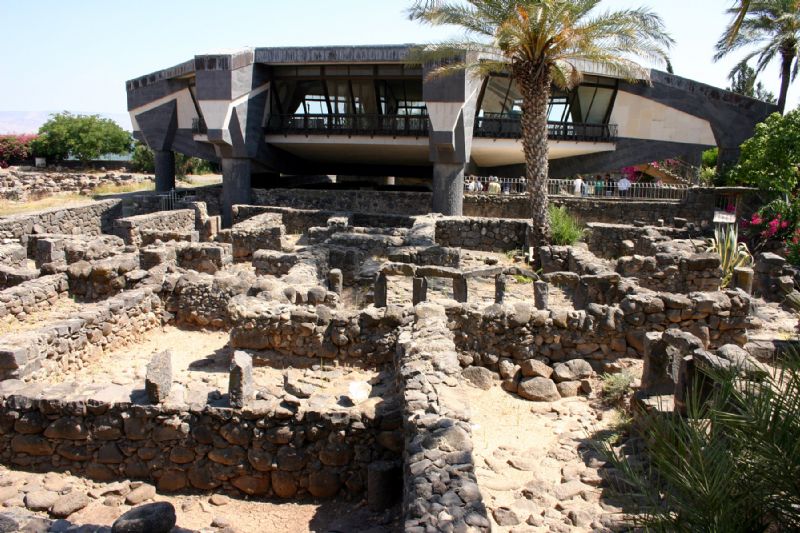 Here you can see the remains of the residences with the modern church built over an ancient church which was built over one of the homes in Capernaum. 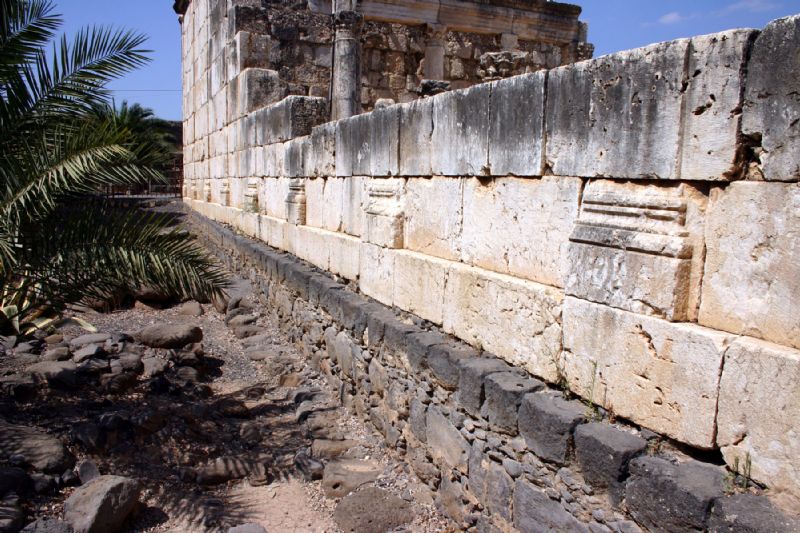 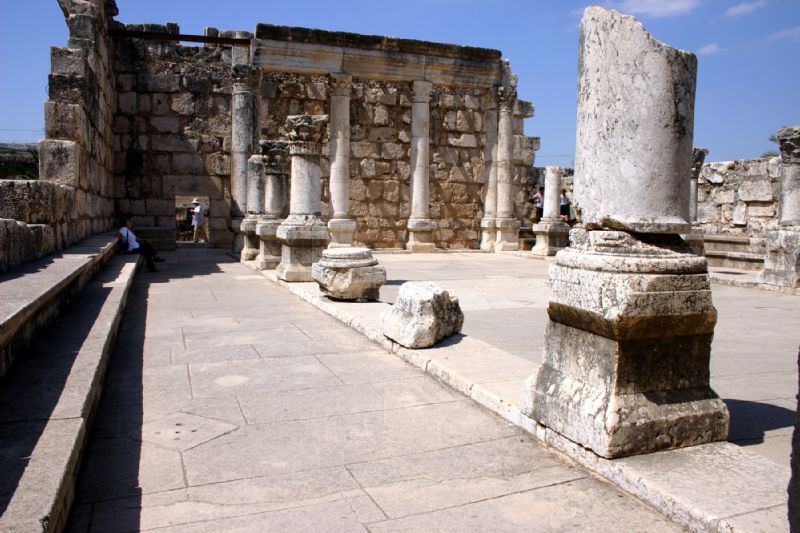 This is inside the synagogue

Matthew again uses an Old Testament passage as a prophetic reference to Jesus.

"arrest" is a technical term for handing someone over into custody. Judas does this to Jesus but it is translated "betray."

"withdrew" indicates some kind of danger to avoid as it is used with the Magi (2:12). Herod Antipas ruled both Perea and

Matthew writes "what is written in Scripture must find its fulfillment.

Matthew says the reason Jesus spend the majority of his ministry in was because Scripture said so.

"way to sea" refers to the road that ran south out of through the area then west through Sepphoris to the   Mediterranean coast. This road was called the "Way to the Sea ()" in 700 BC. The Romans called it "Via Maris"

"Galilee of Gentiles" was the northern part of the of and the first to be invaded by the Arameans (Syrians), Assyria,        , and the Seleucids. The Assyrians had deported many of the Jews and imported people from other lands into             the of and . Following this time the land was occupied and controlled by Gentiles. In the days of the             Maccabean revolt the Jews living in the of were evacuated into . When the Hasmoneans ruled from         the of expanded and Jews again lived in and Gentiles were circumcised there in 104 BC. Since that time       Judea looked down on and the Jews that lived there. Many of the Jews that lived there were not fully committed to Judaism.

"darkness" refers to deception, delusion, despondence. These people have no hope and no ability to alleviate their problem.

"Great light" is a reference to something more than human and beyond natural light (not an idea, nor a philosophy). Emphasis is on "great"        and it refers to a divine intervention

"living" or "sitting" is repeated as is the reference to "light".

"shadow of death" is a reference to a region or an area under the control of death and darkness. This is like Ephesians 2:1-3 referring to   this dark world.

The Light has been identified by Isaiah and Matthew as:

This Light is divine

"From then" a new beginning, a new phase or direction of ministry

Upon arriving in Capernaum Jesus began the next phase of his ministry.