1)      David had been told by God through Gad to return to .  It was the land of his troubles but David was needed there.

3)      When David heard of Keilah’s trouble he asked God if he should get involved.

4)      David could have had the same attitude as his men because he was already in over his head with trouble from Saul, his nation and now the Philistines.  Instead David saw a wrong and wanted to know if God wanted him to get involved.  Instead of complaining, whining, and preserving himself David considered others above himself.

5)      David asked for wisdom.  James 1: 5 says, “If any of you lacks wisdom, he should ask God, who gives generously to all without finding fault, and  it will be given to him.”  God will not leave the searching soul in the dark.

6)      David’s men said no.  They where rightfully afraid because there would be no one to help deliver them from the Philistines (like, their nation, their king, their family, their tribes, etc.).  If they followed David they were truly on their own.  Oh, and of course, God was on their side!

7)      Failure occurs when we act independently of God.  Acting independently of men may be required for us to depend on God and follow him.  David had 600 men say “no” and 1 Yahweh say “yes”. 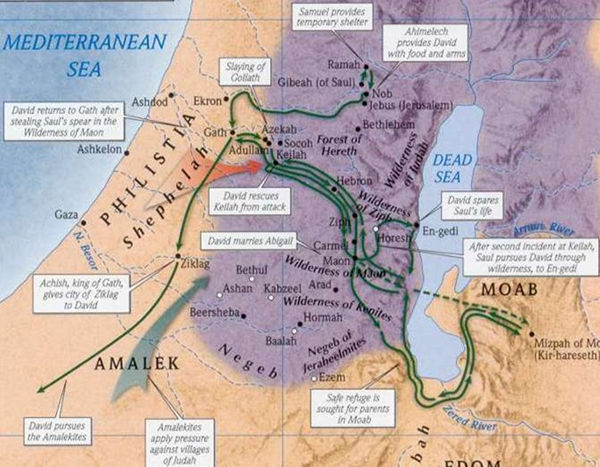 1)      Saul should have seen David’s actions as being a sign of his faithfulness to:

But, instead Saul continued to see David as a threat even as David fought for God, nation and the king.  (Plus, David has taken 600 men who were problem citizens of Saul’s and organized them into a military division that is doing border patrol.

2)      David did not trust Saul nor the people of Keilah.  They both turned on David.  But, David did not strike out in revenge by burning Keilah to the ground and marching out to destroy Saul.  Instead, David trusted God and continued to do what was right.

3)      David knew the city of would face the same fate as Nob if he stayed there.  “Saull plans to come to Keilah and destroy the town on account of me.” (23:10)  David had learned to avoid that kind of situation.

The Threshing Floors were where they would store their grain after the harvest.

Inquire of the Lord by using the Ephod worn by the High Priest Abiathar.

The ephod was holy but was being used by David in the wilderness for guidance.

Similar to us today with the Holy Scriptures being used to guide the common man.

God has guided people in a variety of ways through out history.

In our day in the church age he will guide us by these methods:

1)      When we reflect on the scriptures for application into our lives as in 2 Timothy 2:7

2)      When we understand what God’s will is and live in righteousness.  Our next step will not be so far away.  Ephesians 5:17

Afraid in how much more fighting another nations armed military.

Even though there are many springs around the , most of them have a high salt content. En Gedi is one of only two fresh water springs located on the western shore of the and, because of the greater availability of land for agriculture at En Gedi, it is the best spring by which to settle.

Josephus praised En Gedi for its palm trees and balsam, and the writer of Ecclesiasticus spoke of wisdom that was exalted like a palm tree in En Gedi" (24:14).  One day, the prophet Ezekiel predicted, fishermen would line the shores of the by En Gedi (47:10).