Proverbs 14:35, “A king delights in a wise servant, but a shameful servant incurs his wrath.”

“A wise servant incurs the wrath of a shameful king.”

1 Samuel 19 has counterparts in the book of Psalms that David wrote during this time:

“Flee like a bird to your mountain. . . When the foundations are being destroyed, what can the righteous do?  The Lord is in his holy temple; the Lord is on his heavenly throne.”

19:1 Saul had started with envy of David.  This developed as Saul sent David into dangerous situations and now openly talks to his men and even          Jonathan about how important it is that David be killed.  Saul had justified in his mind that David   was a traitor and now begins to spread his        delusion which is based only on envy

Saul will try to use:

Jonathan logically worked Saul into the right frame of mind

3)      Recalled for Saul his success through the hand of David

7)      Evil spirit prevents any further success or logic from Saul

The evil spirit keeps Saul and David at odds

Psalm 25:21, “May integrity and uprightness protect me, because my hope is in you.”

19:10 - David flees to his house which is ultimately his entering into a life of a fugitive and an outlaw in .

Psalm 59 is about this night in David’s life.

This is the last time David sees Michal until he is king.

David’s house is under surveillance

“image” is teraphim and means “household gods”, also in Genesis 31:19 when Rachel  stole her father’s (Laban) teraphim.  Teraphim where small   images not life size idols.  Michal would have used several.

Four attacks on David in this chapter:

David goes to Samuel in Ramah 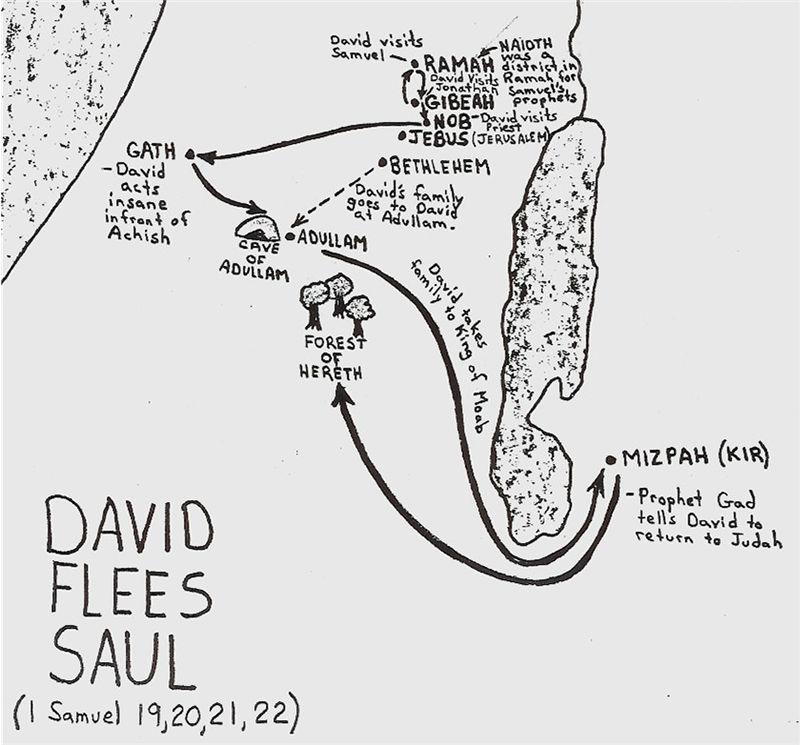 Saul palace was in Gibeah.  David flees from Gibeah to Ramah.  It is a one hour walk.

“Naioth” means “habitations”, or “dwellings”.  Naioth was a residential district in Ramah where Samuel’s prophets stayed.  It was like a suburb with           apartments and homes.  David used this area of the city for safety because of the large number of  people to blend in and hide among.  Some   places this is translated “house of study” which would mean Naioth was the campus of the prophets school and had dormitories.      Samuel had dedicated himself to training spiritual leaders.

We see the lone prophet Samuel was surrounded by other people and many prophets.

This is similar to Elijah and Elisha who led their school of the prophets in the same general area.

The Spirit of God Protects David from:

The Spirit of God came upon them and caused them to have an ecstatic experience to prevent them from killing David.

Ecstatic experience could include a trance, a vision, uncontrolled speaking that was empowered by the Holy Spirit, a state of being beyond reason and          self control.

The Spirit that had anointed Saul now attacks him:

“Is Saul among the prophets?”

The Spirit of God would empower the prophets to do their jobs.

But, the Spirit of God was working against Saul and preventing him from accomplishing his plan

The prophets could move and perform under the anointing of the Spirit.

Saul was so unfamiliar with the Holy Spirit that he collapsed and could not operate in the presence of God.

A comparison of Samuel/Prophets with King Saul