Moses fought them in Deuteronomy 2

Kings of the East fought them in Genesis 14
The giants originated from the Nephilim in Genesis 6 (note: before and after the flood)

The Name of Goliath

The name “Goliath” has been found recently on ancient philistia pottery.  It may or may not
refer the Goliath of 1 Samuel 17 but it does show that the name Goliath was a name used
by the Philistines of this time.  Go to the following sites to read more about this discovery:

A quote from the above articles:

“What this means is that at the time there were people there named Goliath,” he said. “It shows us that
David and Goliath’s story reflects the cultural reality of the time.”

Giants in the Bible

Spear head = 15 pounds or the weight of a shot put

Saul was the tallest and the king.  Saul was ’s hero

Saul has been staying in the background since 14:1-2 when Jonathan and his armor

bearer had to be the heroes

“Dismayed” is “chathath” (#2865) and means to break down by violence and confusion.  It means to

Abolish, beat down discourage and terrify

The Israelites “feared” or “revered” men and so they where “dismayed” or sent into confusion because of men.

David feared God as so was not broken down, confused and discouraged by men

Ephratha was an old name for and distinguished it from another in the north.

Forty was the number for testing: 40 years in wilderness, 40 days of fasting for Jesus

b)      bring a report back about brothers

David did the first two right away but the third one he had to get himself.  He would bring back Goliath’s head and sword.

feared man and not God.

David feared God and not man.

Promise was attack enemies and God would fight:

1)  Accused David of his own (Eliab’s) sin and attitude

David turns away from those who were selfishly trying to discourage him.

God’s strength is more than enough and brings confidence

“boy” is na ar in Hebrew and describes an older teenager

David says “I can not” in man’s power

POINT: Those who don’t will always want to control those who do.

a) a long thin strip of leather

b) had a pouch in the middle

The following information and pictures are from a website called 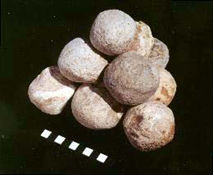 A tennis ball and three slingstones 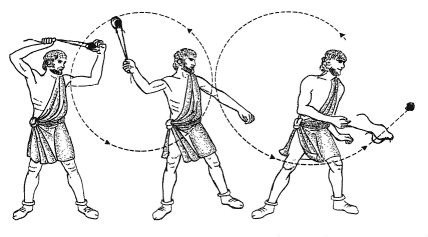 “At one excavation site in Israel, 10 miles north of Jerusalem, slingstones have been found in almost every area of the dig. Interestingly,
the site is located in the territory given to the tribe of Benjamin. This tribe was known for an elite corps of slingers (Judges 20:15-16; 1 Chronicles 12:2),
many of whom were left-handed slingers. 700 of them could each "sling a stone at a hair and not miss."

"After three seasons of excavation, we have found nearly three dozen slingstones. Most are roughly round and slightly over two inches in diameter, from
the size of a billiard ball to a tennis ball."
--archaeologist Dr. Bryant Wood (Associates for Biblical Research)

Ancient hand slings generally consisted of a single long strip of leather or woven wool, with a central "pocket" for the stone. The longer the sling, the greater its range.
Long-range slings were about 3 feet long (0.9 meters).

"Slingers are often visualized as releasing overhead, yet the best way to utilize a sling is by an underhand motion, like a softball pitcher," said archaeologist Grace
Kellner. "Elaborate wind-ups were wasted motion. One windup, like a good softball pitcher, was sufficient."

Before development of the modern compound bow, ancient slingers were as effective as archers and served as an important part of any military force.

Surprisingly, a good slinger hurled a stone as far and accurately as a good archer. Roman military texts recommended archery target practice at about 200 yards
(183 meters). Slingers are known to hurl their projectiles even farther, as much as 440 yards (402 meters) (a quarter of a mile / 0.40 km).

As for accuracy, one ancient writer noted that the best slingers "would wound not merely the heads of their enemies, but any part of the face at which they might
have aimed." Experiments demonstrate that missiles leave a sling in excess of 60 miles per hour (97 km/h).

One Roman writer noted that opponents in leather armor were in far greater danger from sling missiles than arrows. Even if the stone did not penetrate the armor,
it was capable of inflicting a fatal internal injury.

While typical slingstones used by the Greek and Roman armies were the size of golf balls, different cultures liked different sizes. In fact, at some ancient
Greek and Roman battle sites, archaeologists believe they can differentiate which slingstones were standard equipment for which army.

During all periods, it was important for an army's projectiles to be uniform in size and weight. Otherwise, a slinger would need to compensate with each toss.
Each army standardized the size and shape for maximum accuracy, speed and distance.”

God is the commander and not Saul and not David

David’s life principle:  “Nothing to Prove, Nothing to Lose”

David is not trying to be king

David is not trying to be the hero

David is not trying to impress Saul

David is not trying to earn God’s favor

David is doing what is right, what is best and what is expected of a hero.

David was not intimidated.

Saul was asking for information maybe because:
1)  Saul had forgotten David

2) Needed address to deliver the reward