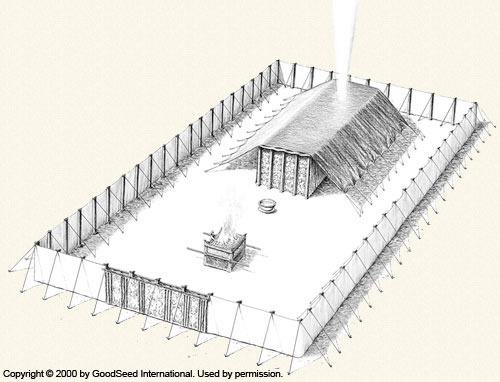 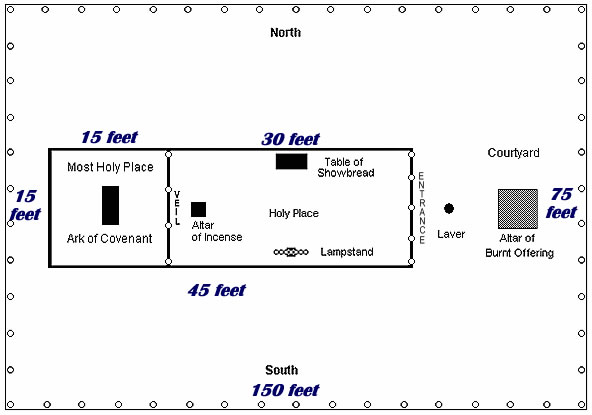 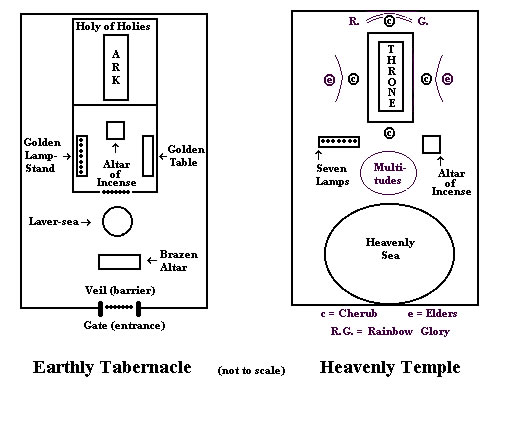 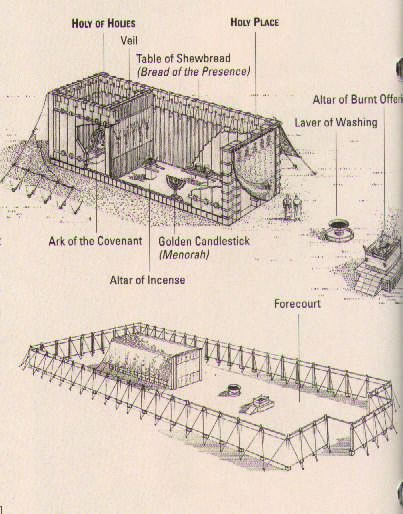 Photo taken by Galyn at Shiloh which was the location of the tabernacle after it was set up in the by Joshua.  Notice in 1 Samuel 1:9 the tabernacle is called “temple” because it had been permanently placed in on this foundation.

“Now Eli the priest was sitting on a chair by the doorpost of the Lord’s temple.”

Eli would have been sitting just to the left of the “7” in “75 feet” on the right side of this picture above. 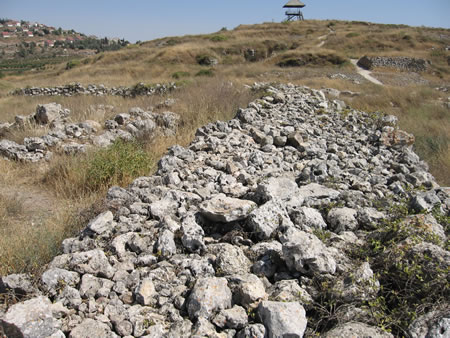 This is the back of the tabernacle. This is the west wall.
The ark would have sat just inside this wall to the left inside the holy of holies

The south wall can be seen going to the left of the picture at the end of this west wall.
The pile of rocks in the middle to the left would have been the location of the ark.

9:1
Now the first covenant had regulations for worship and also an earthly sanctuary.

The inadequacy of the old physical tabernacle is brought into contrast with the real sanctuary in heaven.

Why is the tabernacle used as an illustration instead of the temple?

9:2
A tabernacle was set up. In its first room were the lampstand, the table and the consecrated bread; this was called the .

The Arch of Titus in and Hasmonaean coins show this lampstand.

Which means:
"The Senate
and People of Rome (dedicate this)
to the divine Titus Vespasianus Augustus, son of the divine Vespasian." 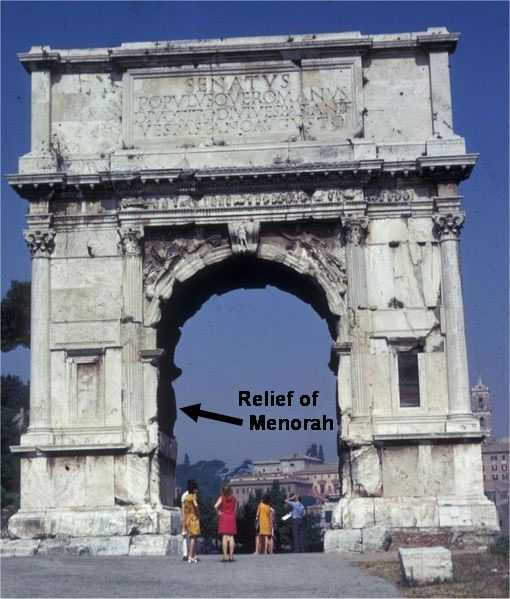 More Photos of the Arch of Titus here: 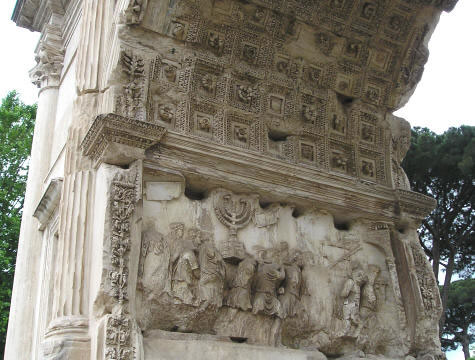 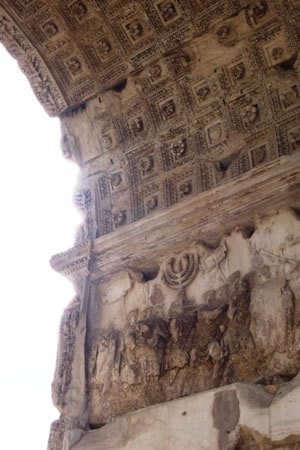 The Arch of Titus (Arco di Tito) is the oldest triumphal arches in .  Dating back to around 81 AD, this victory arch was built by Emperor Dominitian to commemorate the suppression of a Jewish revolt in .  The artwork under the archway depicts the victorious Roman legionnaires enjoying the spoils of their victory. Some 50,000 Jews were brought back to as slaves and were used to helped build this arch.
http://romeitaly.ca/attractions/archoftitus.html 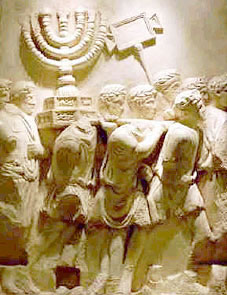 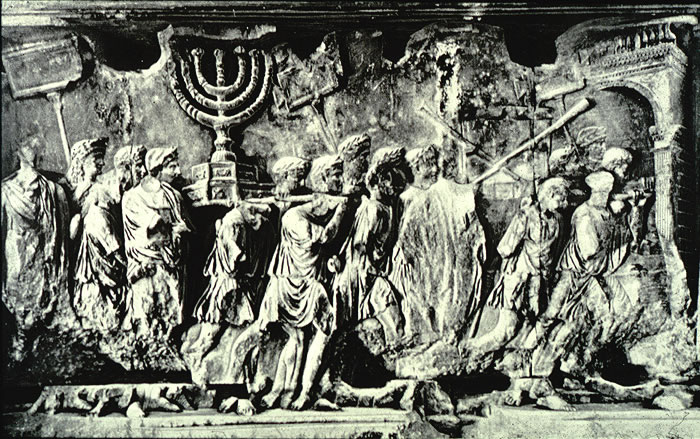 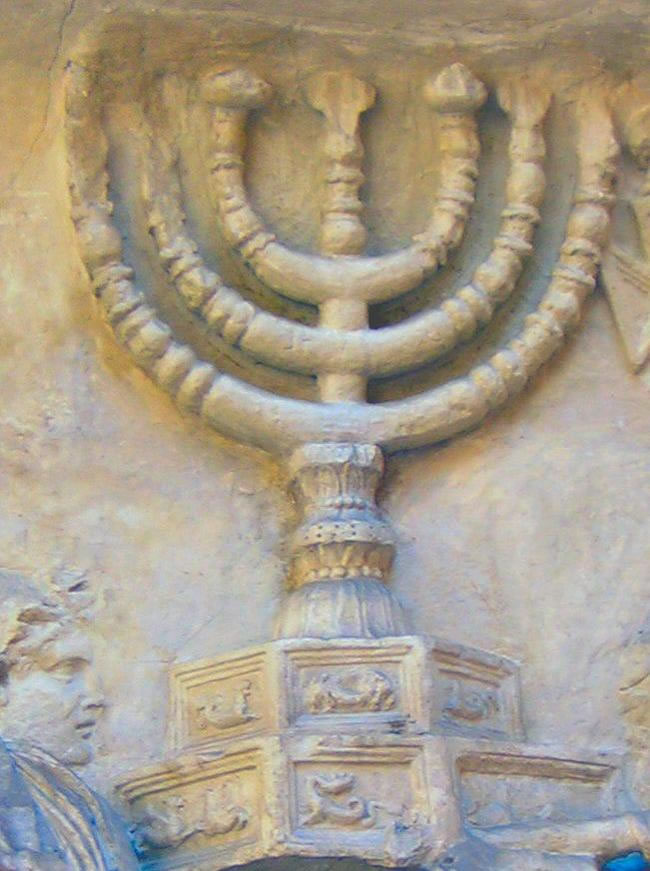 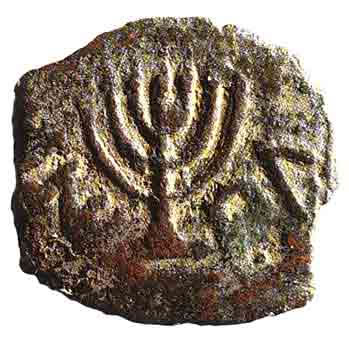 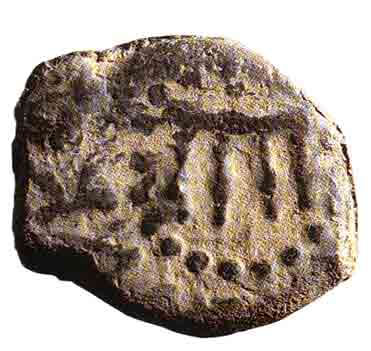 Mattathias Antigonus, 40-37 BCE.
Obverse Side (front or heads): Seven branched menorah with inscription "King Antiogonus" in Greek
Reverse Side (back or tails): Showbread table, Inscription "Mattatayah the High Priest" in Hebrew. Probably a propaganda coin minted as the Hasmonean Dynasty was being destroyed Herod and . 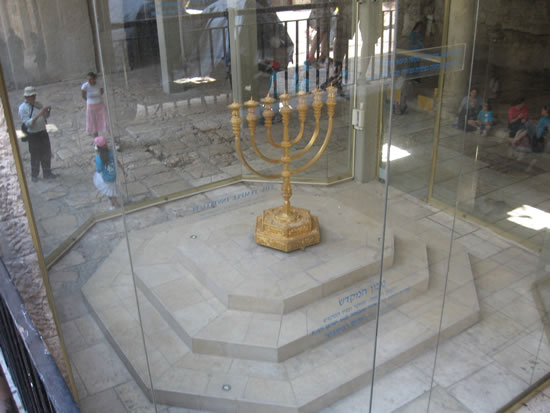 The above and below pictures were taken by Galyn of the Menorah prepared for the new temple.
It is kept in the Cardo and brought to the Western Wall during the Feast of Lights. 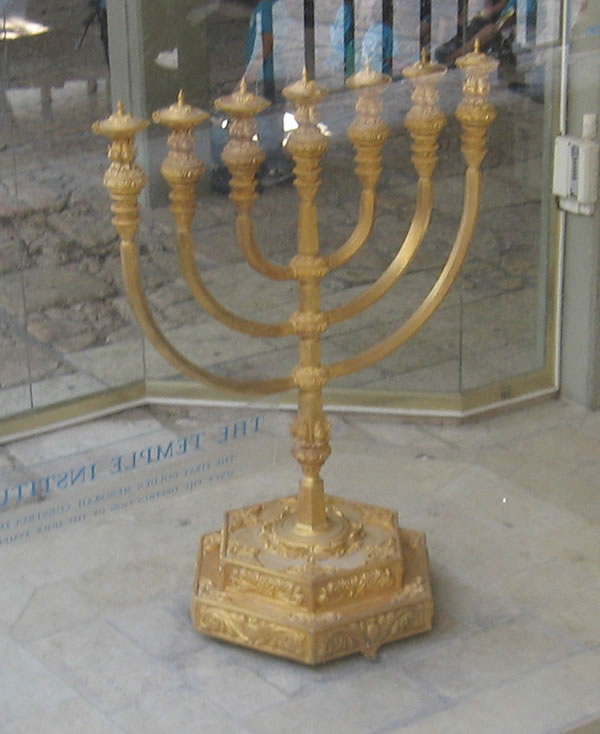 The Table of Shewbread

9:3
Behind the second curtain was a room called the , 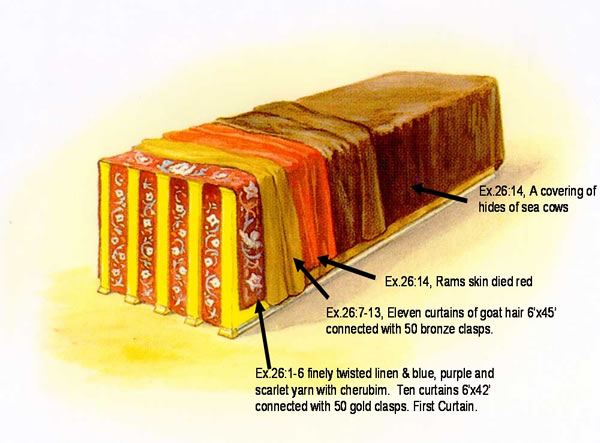 The first covering or curtain was the finely twisted lined with blue, purple and scarlet yarn.
The priest would pass through this curtain as they moved from the outer court into the holy place.

which had the golden altar of incense (Gr. “thymiaterion”) and the gold-covered ark of the covenant. This ark contained the gold jar of manna, Aaron's staff that had budded, and the stone tablets of the covenant.

The Most Holy Place is said to have two pieces of furniture: 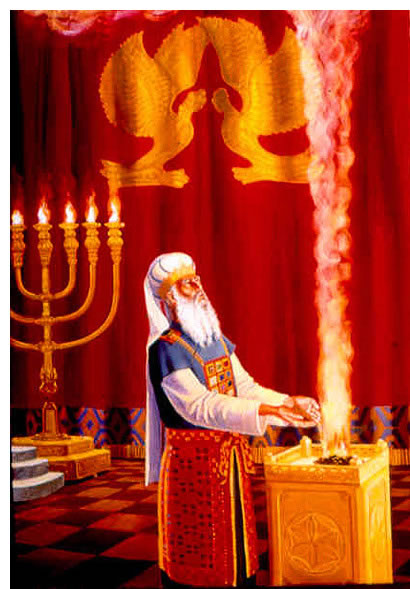 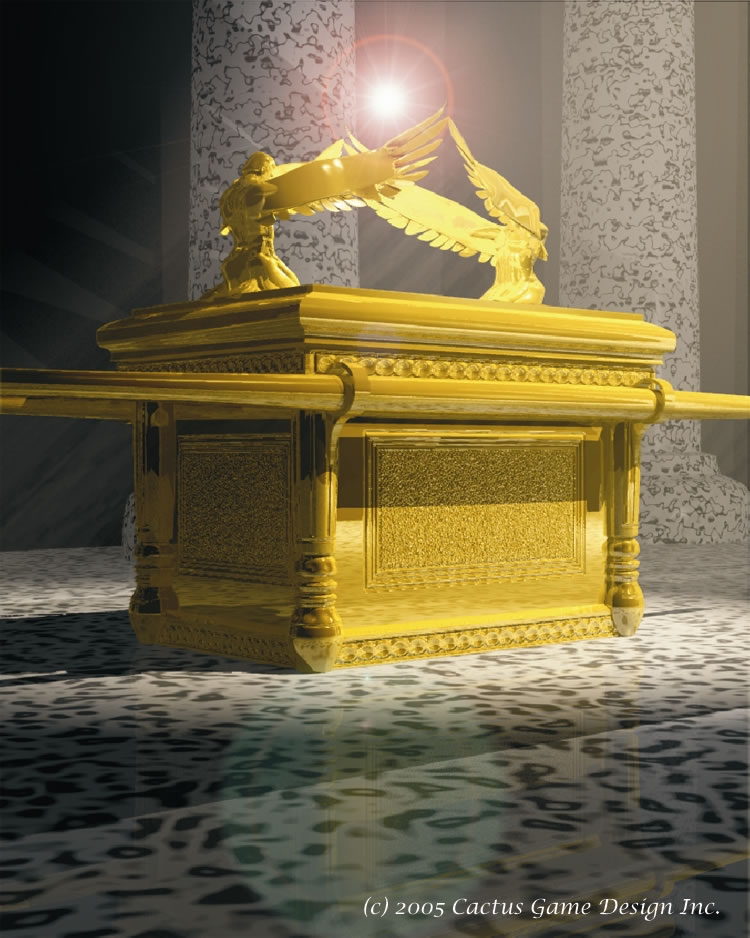 By saying the incense altar was behind the curtain with the ark in the the writer creates a problem.  In Exodus 30:6 it says:

that is over the Testimony – where I will meet with you.”

Exodus 30:7 says Aaron must burn incense on the altar every morning and evening when he tends the lamps.  This indicates this altar was in the and not behind the curtain in the .

Exodus 30:10 says that once a year Aaron will make atonement by putting blood on the horns of this altar with the blood of the atonement offering.

The ark of the covenant was the focal point of the .  It is not heard of again after the Babylonian destruction of and the temple in 586 BC.

What happened to the ark of the covenant?

Above the ark were the cherubim of the Glory, overshadowing the atonement cover.  But we cannot discuss these things in detail now.

The atonement cover or the mercy seat is comparatively called by the author of Hebrews the “throne of grace” in Hebrews 4:16.

The mercy seat is called “the chariot” by David in 1 Chronicles 28:18:

“He also gave him the plan for the chariot, that is, the cherubim of gold that spread their wings and shelter the ark of the covenant of the Lord.”

The cherubim of Glory refer to the cherubim in the presence of the Lord as in Psalm 18:10:

“He mounted the cherubim and flew; he soared on the wings of the wind.”

All of this could have been elaborated on in detail by the author of Hebrews but he is focusing on what took place in the tabernacle on the Day of Atonement.

When everything had been arranged like this, the priests entered regularly into the outer room to carry on their ministry.

But only the high priest entered the inner room, and that only once a year, and never without blood, which he offered for himself and for the sins the people had committed in ignorance.

The blood of a bullock for the high priest.

The blood of a goat for the sin of the people.

The Holy Spirit was showing by this that the way into the had not yet been disclosed as long as the first tabernacle was still standing.

This is an illustration for the present time, indicating that the gifts and sacrifices being offered were not able to clear the conscience of the worshiper.

They are only a matter of food and drink and various ceremonial washings—external regulations applying until the time of the new order.

When Christ came as high priest of the good things that are already here, he went through the greater and more perfect tabernacle that is not man-made, that is to say, not a part of this creation.

He did not enter by means of the blood of goats and calves; but he entered the Most Holy Place once for all by his own blood, having obtained eternal redemption.

The blood of goats and bulls and the ashes of a heifer sprinkled on those who are ceremonially unclean sanctify them so that they are outwardly clean.

How much more, then, will the blood of Christ, who through the eternal Spirit offered himself unblemished to God, cleanse our consciences from acts that lead to death, so that we may serve the living God!