4:25
Begins the godly line that will ultimately:

This account is clearly interested in the “seed” of 3:15.  The seed is identified and traced from generation to generation until it finally reaches to Jesus in Luke 3.

Eve says, “God has granted me another child (Hb. “zera” or “seed”)
When Cain was born Eve said, “I have brought forth a man.”

“Seth” is Hebrew “set” and “granted” is “sat”. Seth name probably means “granted and is referring to God giving or granting another son.

Eve names the children.  Adam named the animals and his wife.

Seth has a son named “Enosh” which is another word for “man” and is similar to the word that means “to be weak, frail.”

At that time men began to call on the name of the LORD (YHWH).

During the days of Seth men began to:

Every thing and everyone has been given a name.

When Moses meets YHWH (“I am that I am”) it is a return to the worship that came from the Garden of Eden.

Cain’s line gave us herds, music and tools.  These made life productive, pleasant and easier.

Seth’s line gave us the name of YHWH.  This gave life purpose, direction and hope.

“This is the written account of Adam’s line.”  This is the “toledot” formula.
The Hebrew says “seper toledot ‘adam” or literally “book of the generations of Adam”.

The word for “book” is “seper” and it does not mean “book” but it refers to something that is inscribed.  It does not refer to what from the inscription goes on or what form it is packaged in.  The original meaning of “seper” may come from the verb “sapar” which means “to scrape” as when someone would scrape a surface flat and clean so they could inscribe something on it.

The book of Genesis is basically a listing of the genealogy of the promised seed with narrative mixed in.  The narrative includes accounts of: Enoch’s being taken away, Lamech naming Noah, the sons of God, Noah’s account, Nimrod the mighty hunter, the nations, great cities, Abraham’s covenant, etc.

Refers back to Genesis 1:26 when God created man.
This is now  in  comparison with man procreating man.
It says here and in Genesis 1:28 that God “blessed them” and named them “adam” or “man”.  Now we see that blessing fulfilled as man began to produce man.

It is important here to see God “name” man just as Eve and the fathers listed here named their children.  God is seen then as the original father in this genealogy.

This account tells us that God is the father of Adam, Seth, Enosh and on just like Moses tells the children of the new nation of the Hebrews in Deuteronomy 32:6: “Is he not your Father, your Creator, who made you and formed you?  Remember the days of old; consider the generation long past.  Ask your father and he will tell you, your elders , and they will explain to you . . . “

This fatherhood of God or YHWH will continue up through Abraham, through the Exodus generation and on.  Even in Luke 3 the genealogy of the Messiah, the seed, ends with this: “. . . Kenan, the son of Enosh, the son of Seth, the son of Adam, the son of God.”

Then through out this account and the book of Genesis the Father God returns to bless his children.  Thus, these 10 generations are a document listing the blessing of the Father God on the line of the promised Seed.  God originally wanted to bless the entire human race, but human folly and sin prevents God’s blessing.  Through this line of the promised seed all the earth and the human race will again be blessed by God.  This was the purpose for calling Abram: “I will bless you . . . .and all peoples on earth will be blessed through you.” (Gn. 12:2-3)

This theme of sons, blessing and a family genealogy with an inheritance is the theme of Paul’s epistles like Ephesians and Romans:

These are two different lines of descendents.
It is not uncommon to find the same name used by people who live at the same time in history.

The Sumerian king list is an ancient list of Sumerian kings and was composed around 2,000 BC.
This was about the time a king named Utuhegal was king of Uruk and had also liberated .  To unite the land  Utuhegal may have had a list or genealogy of the previous  kings inscribed.  Although the kings ruled in different cities they were put in this list.  This would have reinforced his own kingship and attempt to rule the newly united land.

This list begins by saying the “kingship was lowered from heaven”.  This introduction is followed by a list of eight ancient kings:

“These are five cities, eight kings ruled them for 241,000 years.  Then the Flood swept over the earth.”

After the flood 39 kings reigned whose reigns are much shorter.  The longest reign is by Etana who reigned for 1,560 years.  He is number 13 on the list of kings after the flood but other sources from this time list him as the first king after the flood.

Here is some of the text from the Sumerian’s Kings List:

“"After kingship had descended from heaven, Eridu became the seat of kingship. In Eridu Aululim reigned 28,800 years as king. Alalgar reigned 36,000 years. Two kings, reigned 64,800 years. Eridu was abandoned and its kingship was carried off to Bad-tabira. . . .

"The FLOOD then swept over. After the Flood had swept over, and kingship had descended from heaven, became the seat of Kingship. In .... Total: twenty-three kings, reigned 24,510 years, 3 months, 3 1/2 days. was defeated; its kingship was carried off to Eanna.

A Translation of the Sumerian’s Kings List can be found here:

“The Sumerian King List records the lengths of reigns of the kings of . The initial section deals with kings before the Flood and is significantly different from the rest. When the kingdom durations of the antediluvian section are expressed in an early sexagesimal numerical system, all durations except two are expressed as multiples of 602. A simple tally of the ciphers used yields six 10x602 signs, six 602 signs and six 60 signs.

The lives of the biblical patriarchs, however, have a precision of one year. If Adam and Noah are not included (as in the King List), and the lives of the patriarchs are similarly rounded to two digits, the sum of the lives has six 103 signs, six 102 signs and six 10 signs. In addition, if the number representing the sum of the ages was wrongly assumed as having been written in the sexagesimal system, the two totals become numerically equivalent.

It is suggested that the Sumerian scribe that composed the original antediluvian list had available a document (possibly a clay tablet) containing numerical information on the ages of eight of the patriarchs similar to that of the Genesis record and that he mistakenly interpreted it as being written in the sexagesimal system.

That the two documents are numerically related is strong evidence for the historicity of the book of Genesis. The fact that the Sumerian account shows up as a numerically rounded, incomplete version of the Genesis description, lacking the latter’s moral and spiritual depth, is a strong argument for the accuracy, superiority, and primacy of the biblical record. In addition, the parallels between the Sumerian and biblical antediluvian data open up the possibility of establishing chronological correlations between the rest of the Kings List and the book of Genesis.”
-The above text is a small portion of text from the Answers in Genesis Website 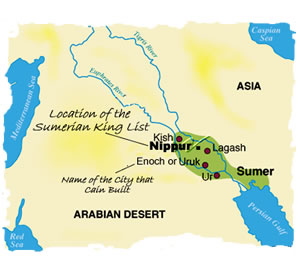 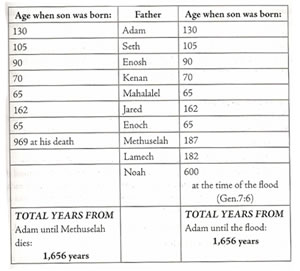 Genealogies from this time were developed and recorded.

Now begins the genealogy with this structure:

The Descending Life Spans in the Old Testament

“Noah was a righteous man, blameless among the people of his time, and he walked with God.”

“I am God Almighty (“el shaddai”); walk before me and be blameless.  I will confirm my covenant between me and you and will greatly increase your numbers.”

The idea of walking with God refers to keeping your part of the covenant obligations.

But, these men Enoch, Noah and Abraham are “walking with God” and fulfilling covenant obligations with YHWH before the Law of Moses.  This shows there is a better way to walk with God than to follow a legalistic code.

It was said of Abraham that he “believed the LORD (YHWH), and he credited it to him as righteousness” (Gen. 15:6)

Enoch is quoted in Jude 14

The Book of Enoch can be found here:

The Book of Enoch is a book written between the Old and New Testaments. Probable date of writing was between 150-80 B.C. Copies of the Book of Enoch have been found among the scrolls. 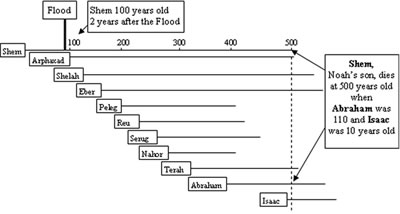