2.      Enoch means “dedication” because the city of was a new start for Cain.

These verses show that culture and technology are good but the sin nature and pride are bad.  This are not verses about how bad cities, nomads, music and tools are.  This is a chapter telling us pagan culture is part of God’s desire for man to control the earth but the problem with mankind is his sinful nature.

Also, these verses show us again that no matter how good your technology, education, arts and industry are they can not overcome man’s biggest problem – the sin nature and pride that lives with in man.  No matter how advanced a culture gets man will still need God and a savior.

This was still a beautiful world with great productive potential.  Man himself was strong and brilliant.  Some estimate that the world’s population was 7 billion by the tenth generation.  If that number is too high the point is still true, there were a lot of people on the earth in these days.

4:17
”Cain lay with his wife, and she became pregnant and gave birth to Enoch. Cain was then building a city, and he named it after his son Enoch.”

Cain’s wife is not named nor is the location of the city.  We assume it is east of maybe in the .
”Nod” means “wandering” and probably was named this because Cain moved into this land as a wander and settled it.

Cain’s wife may have been his wife before he left .  The Bible does not say she came from the .

Enoch built a city which may have been nothing more than a wooden fence to protect himself from the people nearer or just west of him at first.  A fence or walled in home would have been a new thing.  Enoch, Cain’s son, may have been the ruler.

The name of the city “Enoch” may have become known as the city of or Ereck that is recorded in the cuneiform tablets from .  The “N”  sound is often reproduced by the “R” sound and the “CH” sound can become a “K”, “G” or “GH” sound.  Thus, it is easy to see that a city called “Enoch” could become “Uruk” or “Ereck” in the course of time. 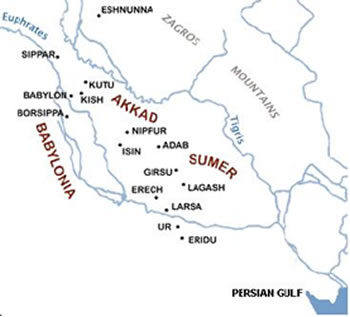 in southeastern . The site has been excavated from 1928 onward. Erech was one of the greatest cities of and was enclosed by brickwork walls about 6 miles in circumference.

·         The Uruk Period stretched from 3800 to 3200 BC. This time saw an enormous growth in urbanization with impressive structures and the earliest evidence of writing. Uruk probably had a population of around 45,000 at the end of the period. Irrigation innovations as well as a supply of raw materials for craftsmen provided an impetus for this growth. In fact the city-state of Uruk also seems to have been at the heart of a trade network which stretched from southern to eastern . 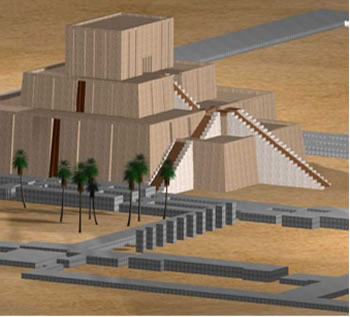 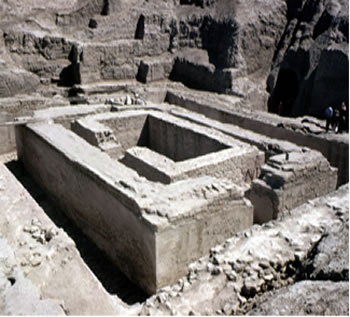 Rebuilt ziggurat in Erech (Uruk, Enoch).  To right, the excavated base of a temple.  See more at:
http://oi.uchicago.edu/gallery/asp_meso_uruk/

4:19
”Lamech married two women, one named Adah and the other Zillah.”

The first recording of the break down of monogamous marriage.  Genesis 2:24 said, “a man shall leave his father and m other and cleave to his wife.”  This scriptural account does not rebuke this union in the text nor does it rebuke Abraham for having Sarah and Hagar; or, Jacob for having Leah, Bilhah, Rachel, and Zilpah; or, Elkanah for having Hannah and Peninnah; or, David for having multiple wives.  Each of these families had some major dysfunctional problems not the least being jealousy and bitter competition. Every polygamous family faced unusually bitter experiences. The scriptures do say that Solomon’s wives led him astray. Solomon set the biblical record with 700 wives of royal birth from , , , Phonecia, and the Hittites plus 300 concubines.

Deuteronomy 21:15 anticipates the social and legal problems with homes with multiple wives.

4:20-22
Lamech and Adah have four children that are listed.  The girl, Naamah, is only listed by name.  The name Naamah means “pleasant, graceful, gorgeous.”  The name Naamah comes from the word for sing “n-‘-m”.  Naamah may have been a singer like her father.

The three boys, Jabal, Jubal and Tubal-cain, all made major cultural contributions in the area of livestock, music and metal.  Their names even rhyme in translation.  In Hebrew the names of these three sons are all connected to the word “yobel” which means “ram” and the musical instrument “ram’s horn” in Exodus 19:13.  In Leviticus 25 it refers to the year of Jubilee.  The word “yabel” means “to bring in procession.  Each of these three names are festive and have the air of celebration and excitement about them.

·        Jabal – in the Hebrew has been abbreviated, probably by dropping the divine title at the end, the “-el”.  The name was originally Jabal-el which means “God leads the procession.”

Each of these sons made a major contribution to society.  The book of Genesis shows right away that in this disobedient line many advantages were given to mankind.  It is as if the writer was showing us that the unrighteous can make contributions to society.  We must be able to separate sin from technology, ungodliness from social advancement and evil from culture.  Even the fallen make wholesome contributions.  History will show us:

·        The Greeks contributed art and philosophy

·        The Romans gave us their legal and political institutions

4:20
”Adah gave birth to Jabal; he was the father of those who live in tents and raise livestock. “

Abel was said to be a shepherd. Here Jabal is said to have started raising livestock.
In Hebrew Abel kept “flocks” or the Hebrew word “so’n”  which refers to smaller cattle, sheep and goats.  Jabal raised “miqneh” which meant not only sheep and goats but also included camels, donkeys and more.

4:21
”His brother's name was Jubal; he was the father of all who play the harp and flute.“

Jubal is similar to the Hebrew word “yobel” which means “ram’s horn.”

These are both stringed and wind instruments.  A harp would better be called a lyre.
The word “flute” is the translation of the Hebrew word “’ugab”

Music enhanced human life by giving an avenue of expressing depth of thoughts and feelings.

4:22
”Zillah also had a son, Tubal-Cain, who forged all kinds of tools out of bronze and iron. Tubal-Cain's sister was Naamah.”

Modern dating of the ancient world organizes it like this:

In Genesis 4:22 Tubal-cain seems to develop bronze and iron at the same time.  The iron that Tubal-cain forged could have been meteoric iron which is iron taken from meteorites.  It was one of the earliest sources of usable iron for man.   There are samples of work done in meteoric iron from 3,000 BC.  Archaeologists have iron objects form dating to 3,000 BC that are made from smelted iron.

The word “forged” is the word “latas and means “to hammer, sharpen and whet.”

4:23
”Lamech said to his wives,
‘Adah and Zillah, listen to me;
wives of Lamech, hear my words.
I have killed a man for wounding me,
a young man for injuring me.’ ”

“Killed” in line three is the perfect form of “”haragti” and can mean:

2.      The killing indicates a condition that Lamech would do if he was pushed but had not yet done.

“seven times” is Hebrew “sib’atayim” and means “dual sevens” or 7+7 which is 14.
”seventy-seven times” would be multiplying either 7x7 or 70x7 for a number representing completion which would be either 49 or 490.
This ending was an ancient brain teaser or play on words.

Cain felt the need for divine protection.
Lamech because of his culture and technology feels no need for God’s help.

It is always a challenge for cultures that are developed and prosperous not to become confused concerning their own frailty and mortality.  Even the most powerful and wealthy of men need God and a savior, but it is hard for them to recognize this.  Jesus said so much when he said, “I tell you the truth, it is hard for a rich man to enter the kingdom of heaven.”  (Matthew 19:24)

This is the last thing we hear of Cain’s procession of descendents.  The next thing we find out about this advanced civilization is they were all wiped out in the flood.  Like always their cultural advances and technology was given to another people but they themselves were removed from history.

4:25
”Adam lay with his wife again, and she gave birth to a son and named him Seth, saying, ‘God has granted me another child in place of Abel, since Cain killed him.’ "

4:26
””Seth also had a son, and he named him Enosh.
At that time men began to call on the name of the LORD.