2000 BC – invaded and abandoned in the Bronze age by an alien people who may have been the forerunners of the Greeks.

700’s BC – began to develop as a commercial center. Political influence increased through territorial expansion with colonies.

400’s – joined against in war.  and were commercial rivals.  This rivalry led to the Peloponnesian War which won.

46  BC – Julius Caesar reconstructs .  He populated it with Roman war veterans and freedman.       Also, Orientals and large number of Jews.

44 BC – is reestablished as a Roman colony.  Romans used the existing buildings but reorganized the city plan and lay out.  Included were additions to the old market place (the agora) and  the bema (the judgment tribulation platform where Paul would appear before Gallio in Acts 18:12).

During this time again became vastly prosperous from : 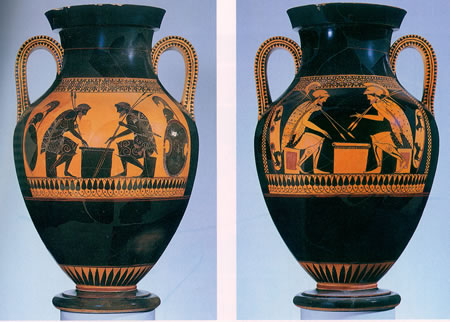 (For more information on pottery go to: http://henry.sandi.net/staff/mbaldwin/greek%20pots.html)

The Isthmian games were celebrated at the of seven miles east of every two years.  These games succumbed to luxury, recklessness and immorality because the sanctuary of Poseidon was given over to the worship of Aphrodite.  Aphrodite’s temple was on the Acrocorinth and had more than 1,000 female prostates also known as priestesses.  The city grew even richer as people traveled to “worship” Aphrodite.

“God is abandoning the .”

The Location of the City 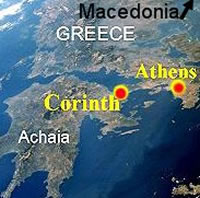 was located on the isthmus (land bridge) between Attica to NE (mainland ) and Peloponnesos (peninsula like formation to the south.)

Small ships were rolled across the 4 ½ mile isthmus on rollers to avoid the dangerous sea around the cape at the southern tip of the .  Large ships would unload in the eastern port, transport the goods across the Isthmus and reload in the western port. 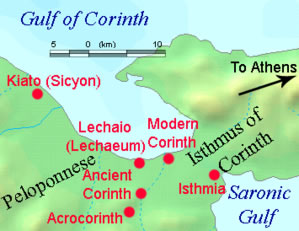 How the City was Laid Out

The was constructed in 540 BC and had 90 limestone columns.  There were two theaters.  The large on was built in 400 BC and had a new orchestra and new scene building added in the 200’s BC. It seated 18,000.  The Erastus inscription stone was found in a paved street at the east side of the theater.  This same Erastus is mentioned in Actst 19:22 and in Romans 16:23 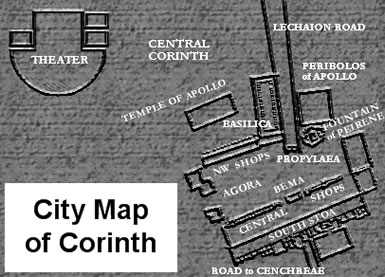 The Triumphal gateway is seen at the north in the wall.  The entered the city at the Triumphal gateway and led up to the Agora )market place, or what the Romans called the forum.)  The Agora was 300 feet by 600 feet and had many shops.  Many shops had individual wells for the heavy amount of wine made and drank in the city.  Paul may have made tents in one of these shops. Located near the center of the Agora with a row of shops on both sides was the bema (Greek) or the “rostra” (Latin) or the tribunal platform or the judicial bench.  From this platform officials addressed audiences.  The bema was covered with marble and fragments can still be found there.  On either side were waiting rooms with mosaic floors and marble benches where magistrates heard cases.  Paul was brought here since a mob would not have been allowed into a .  By the 900’s a church had been built on the bema with an inscription being found that said, “The Church of Saint Paul.” 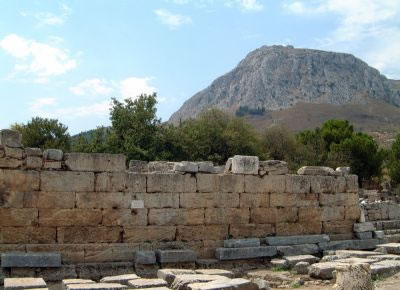 To the south was the acropolis called Acrocorinth.   The ruins in the foreground are the remains of the bema which was located in the middle of the central shops in the Agora.  Acts 18:12-17 records the account of Paul being taken by a mob in front of this bema upon which the proconsul Gallio stood and dismissed the mobs charges.  Roman records show Gallio was proconsul of Achaia from June of 51 AD until May 52 AD.

The People of Corinth in Paul’s Day

The city of in Paul’s day had only been rebuilt 100 years before but it waqs five ties as large as Athen.  The city was ylung, dynamic an dnot bound be tradition. The people were a mix of dislocated individuals without strong ethnic identities.  The Corinthina church shows this mixture in the names of it members

was an extremely reich city. Note the names above of the wealthy church members with the $.

was ornamented with magnificent monuments and buildings such as the & the theater.

They also developed the Corinthian style of columns whose design and use spread through out the world.

Paul writes from in his closing greeting to the Roman, “Erastus, who is the city’s director of public works, and our brother Quartus send you their regreetings.” (Romans 16:23)  Erastus is also mentioned in Acts 19:22 as one of Paul’s associates in the ministry that was sent with Timothy to .  The below picture is a stone from a paved road on the east side of the theater.  The inscription in the stone says, “Erastus the commissioiner of public works bore the expense of this pavement.”  Scripture and this stone identify from the same time period in a man with the same name and with the same public office.  It is almost for certain Paul and this 2,000 year old stone are talking about the same individual. 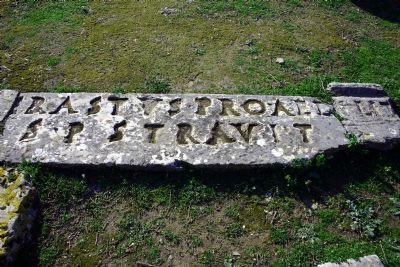 Below is an inscribed lintel block with the words “Synagogue of the Hebrews.”  It dates from the time of Paul’s visit and would have been over the door leading into the synagogue that Paul preached in. 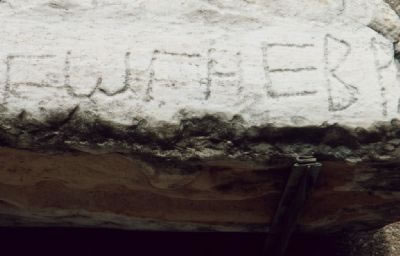 For more photos of Corinth go to http://www.holylandphotos.org

18:2 – Aquila a man of Jewish birth, from Pontus North of  . Priscilla was his wife.

Chrestus uprising in Rome is referred to in this quote by a Roman historian who wrote in 120 AD concerning this time period: “As the Jews had again increased in numbers, but could with difficulty be             banished from the capital without a tumult because of their number, Claudius did not actually expel them,    but forbade them to meet in accordance with their ancestral customs.”  When this did not work Claudius expelled them.

18:3 – Tentmakers were leather workers.  They made military tents and all kinds of leather work in Judaism it     was not proper for a scribe or rabbi to receive payment for teaching.  Most Rabbis had a trade in                    addition to study and teaching.   Gamaliel III commended the study of Torah in combination with a     secular occupation.  He said:  “All study of the Torah which is not combined with work will ultimately be        futile and leads to sin.”

A decision by civic magistrates such as were in Thessalonica would effect only their jurisdiction.  But a decision by a Roman governor would effect his whole province and be followed by other governors through the empire

18:13 – Jewish religion was accepted by due to its antiquity.  Paul’s religion (Christianity) was new.

18:14-16 – Gallio  ruled that this conflict and Paul’s religion were still an issue of Jewish interpretation of their

Law.   Basicallly he said Paul’s “new religion” was still under the jurisdiction of the Jewish “old religion.”

This was a monumental legal decision because it set the stage for the Roman attitude towards Christianity through out most of Paul’s life.  Christianity would not become illegal through out the empire until after the fall of        in 70 AD when Christianity had to separate itself from Judaism and was revealed to as a new religion.

18:17 – Anti-Jewish demonstrations were obviously common and the Gentiles grabbed a Jewish leader

Sosthenes (probably the one who replaced Crispus as  synagogue ruler and beat him.  Sostnenes                      became a believer soon after this as is seen in 1 Corinthians 1:1 when Paul mentions his name in the

opening of the letter.

Gallio was the son of Seneca, a rhetorician (50 BC-40 AD) and a brother of Seneca the younger (3 BC-65 AD) a Stoic philosopher and a member of the imperial court.  He was originally named Marcus Annaeus Novatus but was named after Lucius Junius Gallio.  He was a man of grat personal harm.  His brother said, “No moral is so pleasant to any one person as Gallio is to everybody.”  He left Achaia with a fever and took a cruise.  He died with the rest of his family by Nero’s execution.

Timeline of Paul and the Corinthians

Fall 50 AD to Spring 52 AD – Paul goes to during his second missionary journey.

b) Paul writes a letter to  that has been lost and is referred to in 1 Corinthians 5:9 as the

c) In 1 Corinthians 1:11 Paul has heard of disorder in the Corinthian church from Chloe’s household.

him with questions from the congregation that he addressees in 1 Corinthians 7:1.

Paul follows up this letter with a “painful” visit directly from and back in 2 Corinthians 2:1.

“repented” or “regretted” writing it because it made them sad in 2 Corinthians 7:8.  This letter, his third   to the Corinthians, has also been lost.

Paul left and went to where he met Titus who was on his way back from the        Corinthian church.  Titus had an encouraging report. (2 Corinthians 7:5-7)

TOTAL: Paul wrote 4 letters to and made 3 visits to .