I AM A teacher, and I coach the boys’ track team at our school. Track practice

takes place every weekday after school throughout the season. It’s always been

that way, and probably always will be. One week I learned that a school dance was

scheduled for Friday afternoon right after class ended. Because the dance was going

to go well into the night, I told the boys we’d have track practice after school like

usual, and they could head over to the dance when they were finished. I told them I

was well aware of the dance, but practice was still on. I thought I’d made everything

clear as the boys headed to their locker room after Thursday’s track practice.

On Friday, about five minutes before the last bell rang, I noticed a DJ setting

up his sound equipment for the dance in the school gym. Since our track team

practices right outside the gym, I knew the boys were going to be frustrated when

they heard the music and saw fellow classmates dancing. I wondered if some boys

might still be tempted to skip practice, so, for good measure, I decided to make

Right as the announcement ended, eight boys from the track team walked

into my classroom dizzy with confusion. One boy conjured up his best look of

bewilderment and asked, “Coach, do we have practice tonight? We were wondering

because nobody really knows.” When I again confirmed that we did, another boy

quickly asked, “What happens if we don’t come?” My reply was simple: “You’ll be

Confusion was not limited to this group of boys. Many members of the track

practice. One boy approached a team manager to inquire about it. The manager

supposedly told him, “I think there’s practice…but it might be optional.” That was

all that the boy needed. Now armed with words straight from the mouth of the

team manager, he could claim ignorance to later justify the reason he followed his

desires and went to the dance. As I left my classroom to head to the track, another

boy stopped me to ask about practice. I looked right at him and said, “Yes, we have

practice.” He went to the dance.

running warm up laps on the track outside as they walked into the gym. Yet these

boys remained “confused” as to whether or not there was track practice.

Confirmations about track practice that had taken place:

the boys that there might be some confusion because of the dance, but

that shouldn’t change anything.

boys had to decide whether or not to go to track practice.

announcement, and I told them face-to-face, “Yes we have track

right outside the gym, and the boys who were at the dance could

When all seventy track boys showed up on Monday, I asked why twelve of

them had missed Friday’s practice. The excuses varied but all came back to the

same claim: they were in a state of ignorance due to so much confusion. Some

insisted that I hadn’t made it clear. One blamed the manager for saying practice

was optional. Others swore they forgot. And all the boys who went to the dance

knowing whether or not we had practice. Their strategy involved insisting on

confusion. They figured if enough people said they were confused, I would have to

accept it as a legitimate excuse. But I didn’t. The confused boys lost the privilege of

running in our first track meet.

clear to me that, in life, people choose to be confused. I couldn’t have done 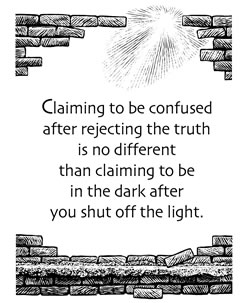 carrying them from the school to the track. (Even then some of the boys

probably would have slipped away to the dance while I wasn’t looking.) After all

my effort to communicate obvious truth, still almost 20% of the boys I spoke with

Today the people of the of have become just like those

junior high boys. It’s a growing cultural pandemic to be confused about what’s

right, true, and moral. It’s hip to claim ignorance and say, “I don’t think we can ever

really know for sure about things we can’t see.” In fact, claiming ignorance is the

the spiritual side of life.

consequences. And just because certain Bible teachings may baffle us doesn’t give

us a free pass to skip over them. Just because some Christian doctrines are hotly

debated doesn’t mean we aren’t accountable for examining the evidence ourselves.

We can’t hide behind our claims of confusion any longer. We must stop making

excuses and admit that things can be known for certain. It’s time for us to quit

being lazy and get busy gaining the understanding we lack. Like the track boys, the

excuse of, “I just wasn’t sure which way was right,” is not going to cut it in the end.