(dark type is new information for this lesson; light type was information covered in the previous class.)

John is a first century document

The action took place between 30 – 36 AD because Pilate was removed from his position by Tiberius Caesar in 36 AD.

This book was written to second and third generation Christians who still had an apostolic witness living among them in the man of John.

Christianity is a historical religion.

The apostles are the link between the historical events and our understanding today.

The book of John is the eyewitness account of the life of Jesus by one of his disciples, John.

b)      Had first hand knowledge of the cities, places, and the lay of the land in

d)      Understood Judaism and its practices, beliefs and schools of thought.

Irenaeus, bishop of Lyons, Gaul in 177 AD says that John the apostles “issued”  (“exedoke” meaning “gave out or “published”)  this gospel in Ephesus.  He said:

“John, the discipleof the Lord, who also had leaned upon his breast, had  himself published a gospel during his residence in in .”

Irenaeus says that John lived until the reign of Trajan.  Trajan began to reign in 98 AD and continued until 117.

Even early Christians believed and wrote that John’s gospel was the fourth gospel.

So church history is unanimous that Matthew, Mark and Luke where already in existence  when John wrote his gospel.

This helps us to understand why John is different than the first three gospels and does not repeat many of the same stories and teachings.  John gives us a different look than what was already available.

Clement of states that John wrote to supplement the information given in Matthew, Mark and Luke.

Critics have placed the writing of John around 160 AD.

But we have references by writers before that date apparently referring to John’s gospel:

a.       “Christ said, ‘Except you be regenerated you shall not enter the kingdom of heaven.’ ”

2)      Tatian a disciple of Justin Martyr wrote a harmony of the four gospels, known as the Diatessaron, before 170 AD.  If the Gospel of John had recently been forged it would not have qualified to be included.

3)      Ignatiaus who was martyred around 117 under Trajen apparently quotes from the gospel of John twice: 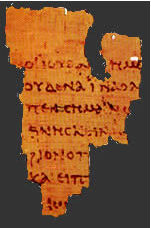 For Greek readers both believers and unbelievers because :

This book is not directly any of these:

a)      written for a specific occasiioin

b)      contain a personal preface as does Luke

c)      not simply a collection of information like Mark

This book does seem to be a defensive writing to strengthen the true theological  foundations of the church.

Church history records John and Cerinthus meeting and having verbal exchanges during John’s time in .

1)      Present Jesus as divine.  Although the first three gospel do the same this was one of John’s key reasons.  John begins with the Word becoming flesh in 1:1 until Thomas exclaims “My Lord and My God” in 20:28.

3)      John’s purpose was clearly evangelistic and that seems to be mainly among the Greeks.

5)      John may have been writing (as he clearly does in 1 John) to combat some false teachings and heresies that had come into Christianity.

2)      Some believe chapter 20:31 was the original ending of the book and that chapter 21 was added later by John or someone else.

a.       No manuscripts have ever been found without chapter 21.

5)      Each of the seven signs are followed by a discourse by Jesus explaining the sign.

b.      Colonnade of Solomon at the outer edge of the temple enclosure where Jesus taught (John 10:23)

d.      The Stone Pavement where Jesus stood before the Pilate and the Praetorium (John 19:13)

10)   Historical events that John writes about:

a.       Roman occupation of although it is to be understood

d.      The organization of the local church

13)  Six conflicts with the Jews are mentioned

a.       Jesus in the incarnation of the eternal God

b.      The Atonement – Jesus is the sacrificial Lamb of God

d.      The person and function of the Holy Spirit